I don’t know how to introduce an article on 4chan. Your image of it does some of the work for me. It’s almost guaranteed to have some truth in it unless you just think its “based” or whatever. It’s pointlessly edgy, flooded with pornography, an echo chamber of right-wing apologia and endless Wojacks. It is also, unfortunately, where I decided to spend too much of my online life, especially in my teenage years. It wasn’t a complete waste- a lot of the games, anime and music I’ve loved I’ve discovered amongst the endless shitposting. I dodged the “disillusioned nerd to unrepentant fascist” pipeline despite the best efforts of like-minded losers and their poorly sourced graphs. I have the dubious position of Q-Anon explainer to both friends and family. But that kind of rationalising doesn’t stop me from questioning why I would ever have submerged myself there, nor does it excuse that the F-slur would come far too easily to my lips, far before I had any real idea of my own gender identity and sexual preferences. Why I sometimes return out of habit, even as it has gotten worse and worse.

If any of that sounds like your experience with Twitter, Tumblr, Reddit etc. then well, yes, that is sort of what my headline was getting at. 4chan is worse (right now, much much worse), but it isn’t hard to find racism, bigotry and pointless vitriol on any of those sites. They generally give you better ways to avoid that content, but even 4chan allows you to “filter” out certain words and phrases. Twitter, in particular, has a similar self-hating aspect, the “hellsite” that we “doomscroll”. But I’m more interested in the reverse phenomenon- why does a website that lacks traditional user profiles, omnipresent apps and unknowable algorithms end up feeling so similar to these social media monoliths?

One way to see this is the direct connection. There are not an insignificant number of 4channers on Twitter, even within leftist circles. They’re not particularly hard to spot. Neither are Twitter users on 4chan. An oft-bemoaned start to a thread is a screencap of some viral tweet that’s precision-engineered to get under the skin of board denizens (read: hot-takes from e-celebs, bonus points for a liberal or heaven forbid feminist POV). A lot of 4chan users wear not using “normie” sites as a badge of honour, yet contribute to the hundreds of posts. Point out the hypocrisy and they’ll repeat the same phrase “/v/ is not a hivemind”. “/tv/ is not a hivemind”. “/a/ is not a hivemind”.

Are we sure about that?

Paranoia is integral to the 4chan experience. Positivity expressed about media? Shill. Discussion of gender identity or sexuality? Discord raid. Enjoyment of something popular? Reddit. On /v/, the videogame board, this paranoia has turned inwards. Certain threads are evidence of “neo-/v/” or “/v/eddit” behaviour. The names change, but the eternal refrain of x or y not belonging remains. Again, if this sounds like Twitter, I’d agree. All of the social media sites seen to have this antagonism between them, even as people use almost all of them. Twitter hates Reddit, Reddit hates Tiktok, Tiktok hates Facebook, Facebook hates vaccines. But so many users bemoan the death of the “board culture”, ruined by an “other”. So is 4chan a site of individuals that has merely become more diverse (not a hivemind), or is it an identifiable set of values that be seen as in opposition to Twitter, election tourists, Discord, Gaia, whatever? 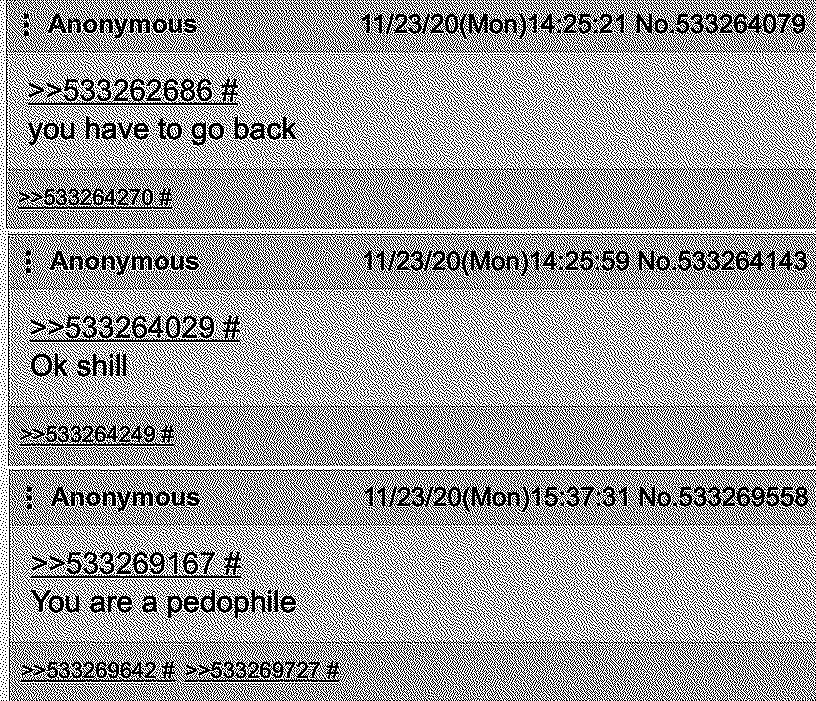 The answer might lie in the central gimmick of imageboards: anonymity. No usernames, contact information or profile pictures required. In theory, this allows posts to speak for themselves, that people can say what they like without worrying about reprise, clout or maintaining some persona. Except uh, not quite. Every board has its “tripf**gs” who choose to post with a name attached, and the moderation of 4chan has always been a strange case due to it being wielded by the same kind of people who would be on 4chan for years and years of their life. So naturally horrific racism (without even the pretence of irony) will often remain, but threads calling a mod’s waifu “a shit” will be nuked from orbit. Still, that means even though things have gotten far, far worse, 4chan has never had this absolute freedom of speech that (in theory) should be baked into the premise of a fully anonymous website. And while it’s true that the majority of posters are anonymous, this doesn’t stop the average anon from ascribing identities to their fellows. Like modern auguries they sift through the guts of each post, determining age (“Zoomer mentality”), sex (“Want to know how I know a woman wrote this post?”), gender (“You’ll never be a real woman”) and yes, if they belong at all (“Filthy secondaries GET OUT”). Anyone can be anyone, but you’re still contributing to the images of certain “types”. This has reached absurd peaks in the weeks before the launch of Cyberpunk 2077, in which repetitive criticisms (some valid, some certainly not) are posted alongside images from the movie Shazam.  While I’m sure a fair number of these posts were indeed from the same member, many others have almost certainly taken on the mantle, contributing to this new “character”. Even when users are anonymous, they can’t help but play into archetypes. 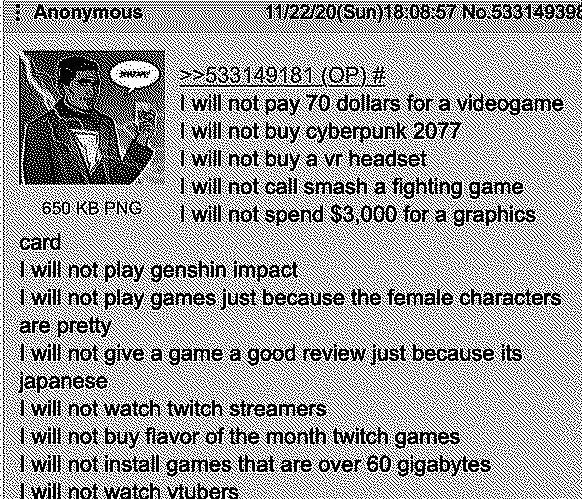 Don’t worry, we’re not about to get all Jungian. The reality is that it's true- no one of the boards is a hivemind. They are several hiveminds, amorphous groups or characters defined as much by outsiders as insiders. No wonder no one can agree what fits the “board culture”- each mind is as free to play No True Scotsman as the other. There isn’t a board culture because there isn’t a 4chan. Or rather, 4chan is the consummate failure of the marketplace of ideas. A supposed libertarian wet dream of free speech created by Christopher Poole in response to apparent overzealous moderation on Something Awful. That it simply doesn’t function should have been obvious from the beginning, if not at least from the creation of 8chan, created as it was in response to… apparent overzealous moderation on 4chan, especially during Gamergate. As I’m not a moron, I’m also not a libertarian, but when came to the site I was a bullied, closeted bi. The appeal of being no-one was intoxicating, as was the contrarianism. It served an antidote to all the posturing on Facebook. But was that ever true? It was disconnected from my family and peers, but so is my Twitter. The only true difference is there is no indelible mark of my posts… unless they were archived, but I at least can take the small comfort that it would be difficult to trace back to me. But that’s it. “Why would you lie on an anonymous imageboard?” is a common refrain. Yet people do. All the time, and not just to troll. The raw honesty of anonymity buckles under still trying to forge a coherent identity, since you’ll no doubt be pigeonholed anyway.

Have people been conditioned this way? Or is it just that a true anonymous discussion can’t work? Our brains can’t see all of them as individuals, so we divide. Why do all these sites feel the same? Maybe we can’t see them any other way. If sites have been adapted to take advantage of our psychology, do we do the same to others? I think so. Even on mediums where “number go up” isn’t so obvious, we find a way. When you’re replied to on 4chan, you have the usual ID string linking back to your post. You also have a “(You)”, a small string of text next to that number. Well, that’s nothing, almost to be expected. But if you got a lot? Well, it’s still nothing, but it’s a little more nothing. You probably got it for a snappy own or you baited a lot of people. Often if a post is especially spicy, the replies will tend towards “put me in the screencap!”, expecting that someone will edit it into an image to be shared… where, exactly? In later 4chan threads, sure. But realistically it will travel further on Twitter, Reddit, Imgur, even the bottom of the barrel meme sites like Funnyjunk and 9gag. 4chan, for all its pretences, for all its inhospitality, is part of the same endless content churn that all of these sites are. Before, it was believable to say 4chan was not just the “asshole of the internet” or the “internet hate machine” but the progenitor of a great deal of internet culture: from the saccharine sweetness of Caturday (turned into the media empire of ICanHazCheezburger) to the far more sinister GamerGate. The delay that used to exist between 4chan in-joke to plastered over the internet barely exists, with the “other” influencing it as much (if not more so) than it does the “other”. If the word “anon” can be heard on the nightly news, even appended with a “Q”, we have truly normalised the chans. 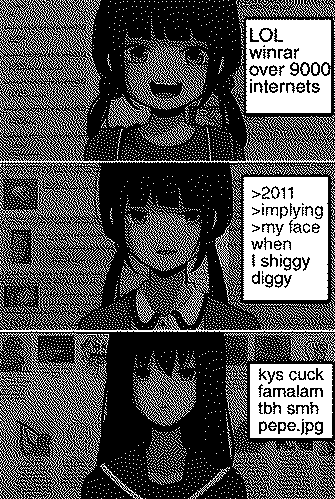 Part of the reason I’m enjoying the Zonelets (and by extension Neocities) platform is that it feels disconnected from some of this. A deliberate throwback to the days of eccentric and esoteric odd spaces on the Internet, connected at most by a webring. But I can’t help linking it to my Twitter. As a budding writer (hint hint plug plug) I feel the need to cultivate a social media presence. I don’t wish to project all my insecurities about the online world onto you, reader, but I don’t feel I’m alone in this: as much as we have made the Internet, it has made us, and though we may log off or even delete accounts, those pathways are always there. But I’ve always been more of an absurdist than a nihilist, so I’m going to keep trying to wander away from those paths. It’s worth a try.